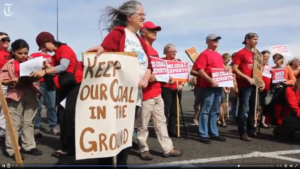 ‘The Department of Ecology rejected a water quality permit that Millennium Bulk Terminals sought because the proposed facility near the city of Longview would have caused “significant and unavoidable harm” to the environment.’

“Lighthouse Resources, Inc. announced today that it would no longer pursue its appeal of the Oregon Department of State Lands (DSL) rejection of a permit that would have been needed for the Morrow Pacific coal export facility in Boardman, Oregon.” 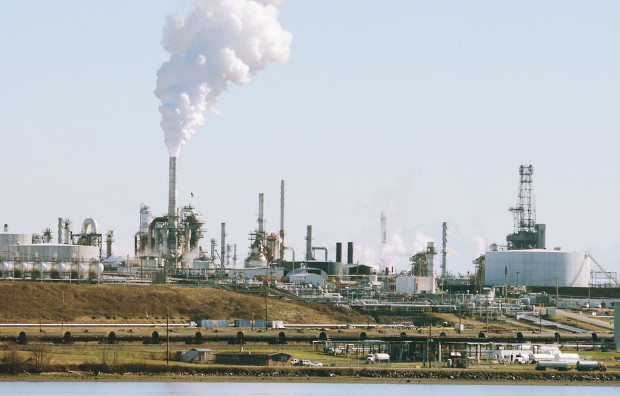 “ANACORTES — Shell Puget Sound Refinery announced Thursday that it is no longer pursuing the rail unloading facility it has worked toward for several years, much to the surprise of government agencies reviewing the project and groups opposed to it.”

A group of Spokane, Washington citizens are currently protesting on the BNSF railroad tracks off Trent, east of Napa. The action is being carried out to alert the region to the rapidly expanding impacts of climate change.

““We were willing to be arrested to stop climate change,” said Nancy Nelson, dressed in a blue floral dress with a matching hat. “With the oil and coal trains coming right through our city, this is a very serious issue, which we have to address.”

The women – all grandmothers – were the last of about 20 people who blocked rail lines near Trent Avenue and Napa Street.”

The future of oil and coal traveling by rail through downtown Spokane will be decided by voters in November. The City Council voted 6-0 on Monday night to put the question before voters, …” 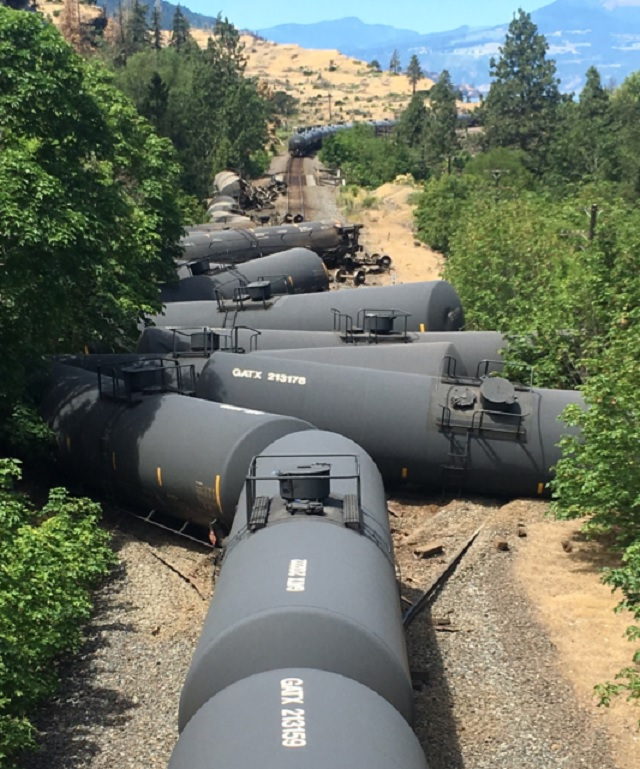 “PORTLAND, Ore. (KOIN) — A train towing a highly volatile type of oil derailed Friday in Oregon’s scenic Columbia River Gorge, igniting a fire that sent a plume of black smoke into the sky and spurring evacuations and road closures.

Eleven cars derailed Friday in the 96-car Union Pacific train and the railroad said several caught fire. The crash released oil alongside tracks that parallel the Columbia River near Mosier. …

The train was carrying Bakken crude oil to Tacoma, from Eastport, Idaho. Bakken crude is known for being highly volatile because it has a higher gas content and vapor pressure and lower flash point than other varieties.” 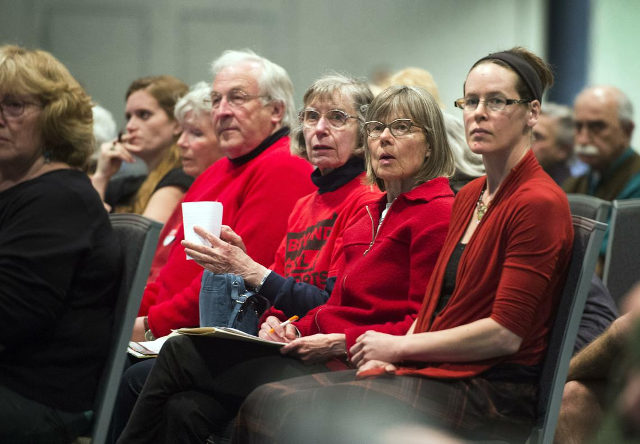 “A proposed coal-export terminal in Southwest Washington could eventually bring 16 more trains through Spokane each day.

Millennium Bulk Terminals would transfer coal from rail cars onto ships bound for energy-hungry markets in Asia. By 2028, the proposed Longview facility would export about 44 million metric tons of coal each year.”