Hundreds of people attended the Longview Coal Terminal Hearing on June 26 at the Spokane Convention Center.  Participants provided testimony continuously during the two sessions in the afternoon and evening.  Northern Plains Resource Council provided three vans that carried a Montana contingent of citizens to protest the terminal. 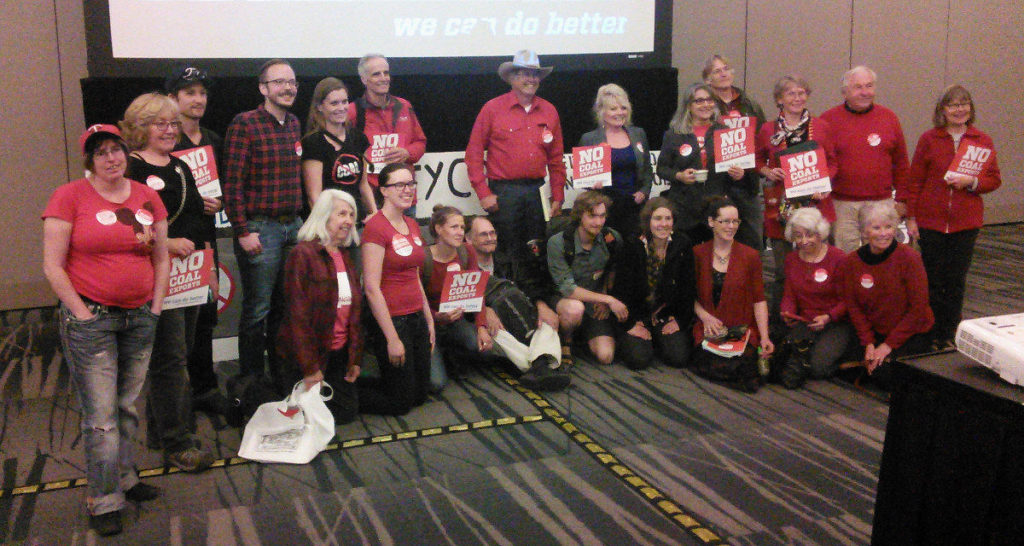 The event, one of several hearings, allowed public comment on a proposed Millennium Bulk Terminal in Longview Washington.  The terminals “…would transfer coal from rail cars onto ships bound for energy-hungry markets in Asia. By 2028, the proposed Longview facility would export about 44 million metric tons of coal each year.”(Spokesman.com). This coal would add millions of tons of CO2 to the atmosphere each year.

Anyone can make  comments on the proposed  Environmental Impact Statement until 05/13/2016).

Most of the Montanans who attended the hearing testified against the terminal.  However paid officials such as a Montana Assistant Attorney General and Montana Sen. Duane Ankney, R-Colstrip testified in support of the terminal.

The hearing had the atmosphere of an athletic contest.  Supporters of the terminals wore blue shirts, some apparently provided by building trades unions, that advocated jobs and building it right.  Opponents of the terminals wore red colored casual clothing.  Millennium representatives and State officials wore  formal attire.   By the ground rules, no applause or shouting was allowed, but  10″ x 10″ signs were allowed.  Each group would rattle their signs as they listened to favorable testimony showing approval.

Each side had their own locker room (i.e.  hospitality center) where they retired in the break between sessions. A half dozen speakers addressed the red team during this rally.  The speakers included Mark Fix a rancher form  Miles City.;  Liv Larson-Andrews the pastor from  Salem Lutheran in Spokane; Twa-le Abrahamson-Swan the Spokane Tribe Air Quality Manager; and Ben Stuckart,  the Spokane City Council Chair.