While walking the roadway between Fidalgo Bay on my left and the vast web of fossil fuel technology associated with the Shell and Tesoro refineries on my right I listen to people. I seek out the “Peacekeepers” to learn more about their background, their training and motivation as they make their contribution to our entirely non-violent action.

I listen to an orchardist from the Willamette Valley explain her decision to rip out plum, apple and cherry trees in favor of more drought-tolerant plants and trees as the climate changes in even the wettest of Oregon valleys. I listen to young women with children, and older men like myself who are motivated to participate in climate protests because of grandchildren. And I hear a man behind me say, “I’m an operator at the Shell refinery.” I know the code, so I drift back through the crowd and keep this unshaved man in a black tee-shirt on my left so I can hear his story above the wind. I gain admission to the conversation because I tell him, “My son was an operator in southern California and now works as a biologist for BP.”

This cracks the molecule. When I express amazement that a man who controls the valves at an oil refinery is walking with climate activists he says, “I see what’s going on. I’m a grandfather too, and want a different future for my children and grandchild. Look, I don’t want Bakken trains here any more than you do. Those things are so full of explosive material that they pose a risk for me and the young guys who work on my team.” He pauses to make sure I understand. Resuming, he says, “At these plants we basically boil gasoline. Tell me about danger.”

I continue to ask him about his motivations and safety concerns, and the role of subcontractors at the refinery whom the bosses hire when they don’t want to put their own workers at risk. Knowing that there aren’t many secrets on a refinery crew, I ask him how the young men he supervises responded to him once they found out he was joining the march. He says, “I tell them, ‘Look around. Things are changing and they are changing fast. We better see what’s going on.’ Did you know that Dubai has decided that solar is cheaper than continuing to put money in oil infrastructure? They are making massive investments in solar energy, and when this becomes about economics it’s going to change really fast. We can’t keep doing this, never mind the danger. I’m just planting seeds, putting little seeds in the ground hoping they’ll grow. And if they start to give me backtalk (I smoke cigars), I tell them, ‘Hey guys, I’m going out for a smoke.’ We cool off and then go back to what we have to do to support our families.” 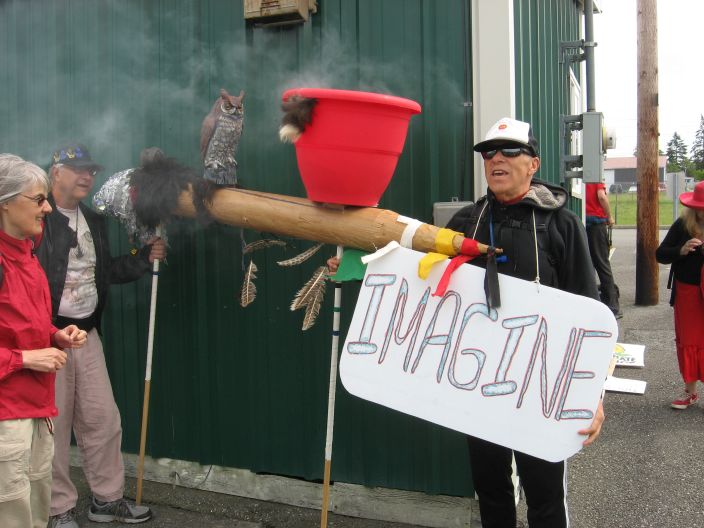 He pauses again, checking to see if I get it.

After a while I begin to feel like I miss the Montana contingent, I tell him how much I appreciate his courage, what a pleasure it was to talk with him, how much I hope for his safety. I can tell he was glad to tell his story. I shake his hand and look ahead for our banner, the turkey and cowboy hats.

It now occurs to me that we shouldn’t be surprised that this man was in “our” march. He knows first hand the dangers of working with, breathing, and continuing to burn fossil fuels. When we feel as though all the great powers are aligned against us, including the power of indifference and cynicism; as we look at the long line of black-clad cops with pistols on their hips and automatic weapons in their SUVs who see us as the threat, not the system they are defending, we need to remember that there is leaven in the loaf. As the refinery worker said, “Things are changing and they are changing fast.”

Sometimes it is the stranger in our midst who convinces us to keep having faith in our cause.