MISSOULA, Mont. — Missoula joined 70 communities across the country to rally in support of what’s called the children’s climate change case at the U.S. Supreme Court.

The case involves 21 kids and young adults between the ages of 11 and 22 who are suing the federal government for violating their constitutional rights by causing climate change. It’s also been known as Youth v. Gov and Juliana v. United States.

The trial was originally scheduled to start Monday, that’s why organizers planned the rallies for that date.

More than two dozen people attended the demonstration outside the federal courthouse in Missoula Monday.

Leaders of several organizations and a couple children took the stage to talk about why this case is important.

“There’s a fierce urgency now to work through a climate recovery plan, and this trial has the potential to break through the logjam,” said Jeff Smith, co-chair of 350 Montana and one of the rally organizers.

He says this is all about our nation’s kids.

“Look to the future of what your kids are going to inherit. This might be the first generation that has a less secure climate than anyone that’s come before. So it’s very important to look forward to their future,” said Smith.

The trial did not start Monday as scheduled. The solicitor general asked for a stay on behalf of the president, the U.S. Environmental Protection Agency, the U.S. Department of Agriculture and other federal parties.

They say the suit is an attempt to redirect federal environmental and energy policies through the courts rather than through the political process. The feds accuse the other side of asking for a nationwide plan without regard to procedural or other limitations in those agencies.

You can read the full application for a stay here.

The plaintiffs filed their response by their deadline Wednesday. Right now the court is considering the government’s request to throw out the suit. 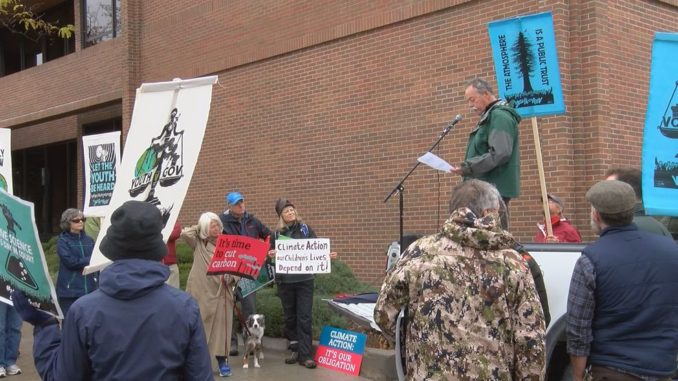