The activists, many who represent the organization Deep Green Resistance, initially blocked the open-faced train with a tripod set up on a rail trestle beginning at around 4pm Saturday. When the activist in the tripod was finally extracted by law enforcement eight hours later, a second group of activists locked themselves in an undisclosed location somewhere along the halted mile-and-a-half long train. It was around 3am when the two additional locked-down activists were finally discovered and cut out of their devices. All three activists were charged with trespassing, resisting arrest and obstruction of a train.

With the coal train unable to move for almost twelve hours and only three individuals charged, this blockade is one of the longest sustained disruptions of the fossil fuel industry with the least number of arrests in recent activist history. Open-faced coal trains, mostly coming from extraction sites in the Powder River Basin, pass through Bellingham on a daily basis, leaving toxic coal dust that pollutes the air, water and soil in their wake. In the current context of accelerating climate change, increased resistance to coal transportation in the region means a fighting change for survival of salmon, foxes, blue heron, Peregrine falcon, harbor seals, orca whales, shellfish and so many more precious creatures. 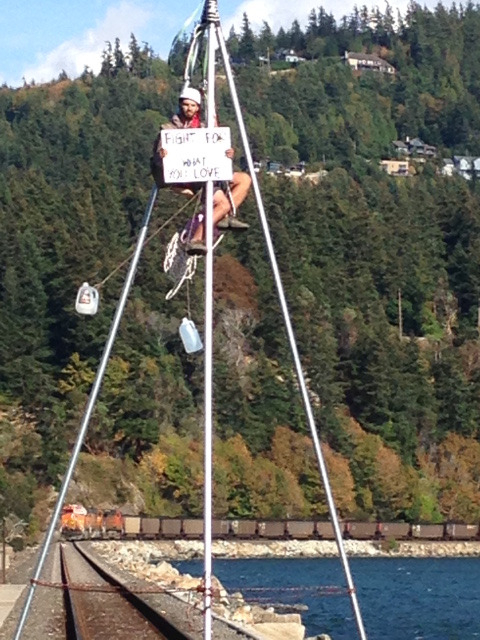 During the action, the person in the tripod held a sign that said “Fight for What You Love,” and was kept company by his fellow activists and a large group of community members who came out in kayaks to show their support.

This blockade and lockdown contributed to a summer of resistance to fossil fuels in the Pacific Northwest led by a variety of environmental groups and individuals who have become disillusioned with more bureaucratic change-making processes. As one of the Deep Green Resistance supporters on the site of the action said, “as a movement we have been trying every legally-sanctioned tactic for generations, and with climate change accelerating faster than we can seemingly stop it, it’s time for last resort tactics.”

Those who have spent any time trying to protect wild places are familiar with the struggle to enact change within the cumbersome legal system and can articulate the disappointing measure of bureaucracy. Many have been organizing for decades and have seen few victories. A survey of the activists at the site of yesterday’s action revealed a history of lobbying, policy making, publishing, educating, and participating in symbolic protests, but the failure of those actions to lead to measurable change lead the activists to turn to civil disobedience. These activists, like many others, consider direct action as the only means left for survival.

The wave of direct actions this summer, from the mass occupation of train tracks in Anacortes, Washington to the blockade of a clear cut lead by Karuk activists in the Klamath National forest and the lockdown to train tracks in Mosier, Oregon is testimony to the growing mass of activists ready to amp up the struggle for ecological health.

Yesterday’s blockade was a major success in halting the cogs of the fossil fuel industry and sending a clear message that those who care for the living planet are willing to fight for it. 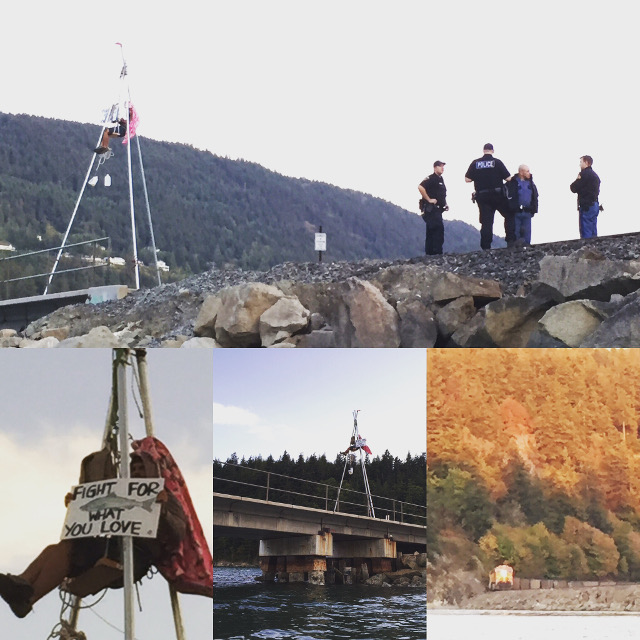